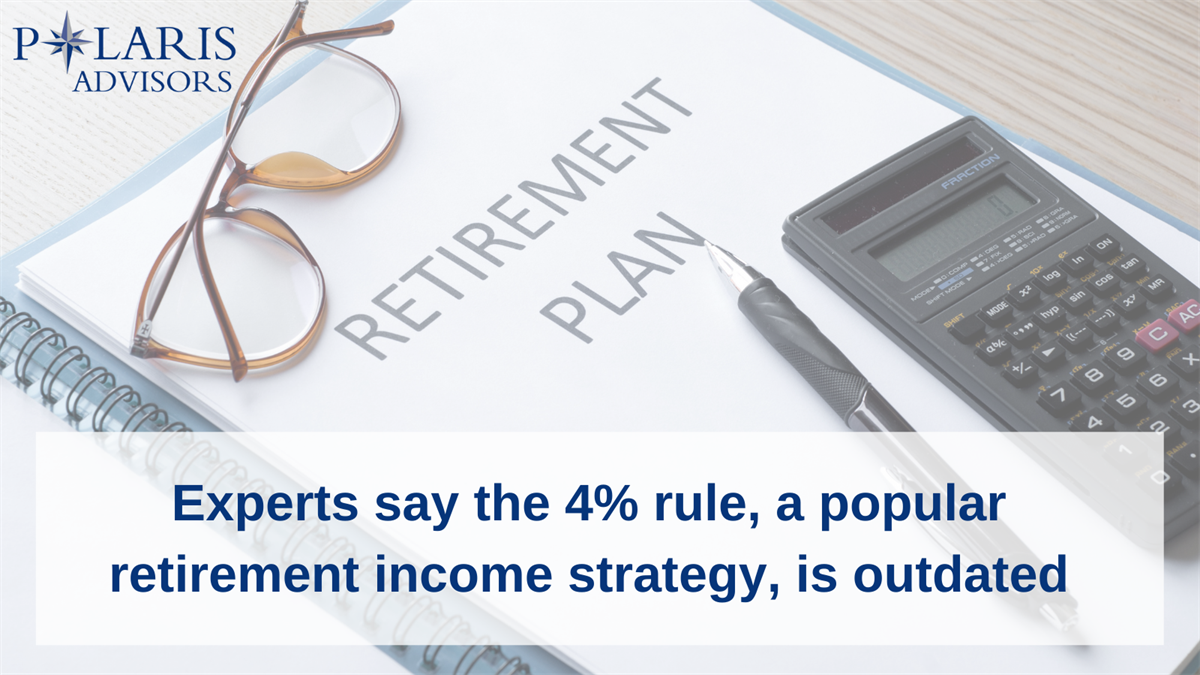 Market conditions are pressuring the 4% rule, a popular rule of thumb for retirees to determine how much money they can live on each year without fear of running out later.

Withdrawing money from one’s nest egg is among the most complex financial exercises for households. There are many unknowns — the length of retirement, one’s spending needs (health costs, for example) and investment returns, to name a few.

The 4% rule is meant to yield a consistent stream of annual income, and give seniors a high degree of comfort that their funds will last over a 30-year retirement.

Simply, the rule says retirees can withdraw 4% of the total value of their investment portfolio in the first year of retirement. The dollar amount increases with inflation (the cost of living) the following year, as it would the year after, and so on.

However, market conditions — namely, lower projected returns for stocks and bonds — don’t seem to be working in retirees’ favor.

Given market expectations, the 4% rule “may no longer be feasible” for seniors, according to a paper published Thursday by researchers at Morningstar. These days, the 4% rule should really be the 3.3% rule, they said.

Though the reduction may sound small, it can have a big impact on retirees’ standard of living.

For example, using the 4% rule, an investor would be able to withdraw $40,000 from a $1 million portfolio in the first year of retirement. However, using the 3% rule, that first-year withdrawal falls to $33,000.

The difference would be more pronounced later in retirement, when accounting for inflation: $75,399 versus $62,205, respectively, in the 30th year, according to a CNBC analysis. (The analysis assumes a 2.21% annual rate of inflation, the average projected by Morningstar over the next three decades.)

Retirees have enjoyed a “trifecta” of positive market developments over the past several decades, according to Christine Benz, the director of personal finance and retirement planning at Morningstar and a co-author of the new report.

The dynamic has perhaps lulled near-retirees into a false sense of security, Benz said.

Bonds are “highly unlikely to enjoy strong gains over the next 30 years,” and high stock prices are likely to fall as they revert to the average, according to the report. The analysis concedes that this result is likely though not inevitable.

(While inflation has been historically high in recent months, Morningstar expects it to moderate over the long term.)

Investment returns are especially important in the early years of retirement due to so-called sequence-of-returns risk. Taking too large a withdrawal from one’s nest egg in the first year or years — especially from a portfolio that’s declining in value at the same time — can greatly increase the risk of running out of money later.

That’s because there’s less runway for the portfolio to grow once the investments rebound.

Of course, there are ample caveats to this analysis of the 4% rule.

For one, the 4% rule (and the updated 3.3% rule) only consider one’s portfolio investments. It doesn’t account for non-portfolio income sources like Social Security or pensions.

Retirees who delay claiming Social Security to age 70, for example, will get a higher guaranteed monthly income stream and may not need to lean on their investments as much.

Further, the rule of thumb uses conservative assumptions. For example, it uses a 90% probability that seniors won’t run out of money over a 30-year retirement.

Retirees comfortable with more risk (i.e., a lower probability of success) or who think they won’t live into their 90s may be able to safely withdraw larger amounts of money each year. (A 65-year-old today will live another 20 years, on average.)

Perhaps most significantly, the rule assumes one’s spending doesn’t adjust according to market conditions. But that might not be a fair assumption — research shows that seniors generally fluctuate their spending through retirement.

Retirees have a few options in this regard to ensure the longevity of their investments, according to Morningstar. Generally, these call for lesser withdrawals after years of negative portfolio returns.

For example, retirees can forgo inflation adjustments in those years; they may also choose to reduce their typical withdrawal by 10%, and revert to normal once investment returns are again positive.

“There are some simple tweaks you can make,” Benz said. “It doesn’t have to be one giant strategy; it can be a series of these incremental tweaks that can make a difference.”

However, there are tradeoffs to being flexible. Chiefly, making these annual adjustments to spending might mean big swings in one’s standard of living from year to year.

This material is for general information only and is not intended to provide specific advice or recommendations for any individual. There is no assurance that the views or strategies discussed are suitable for all investors or will yield positive outcomes. Investing involves risks including possible loss of principal. We suggest that you discuss your specific situation with your financial advisor prior to investing.

Polaris Advisors and LPL Financial are not affiliated with any of the other referenced entities.